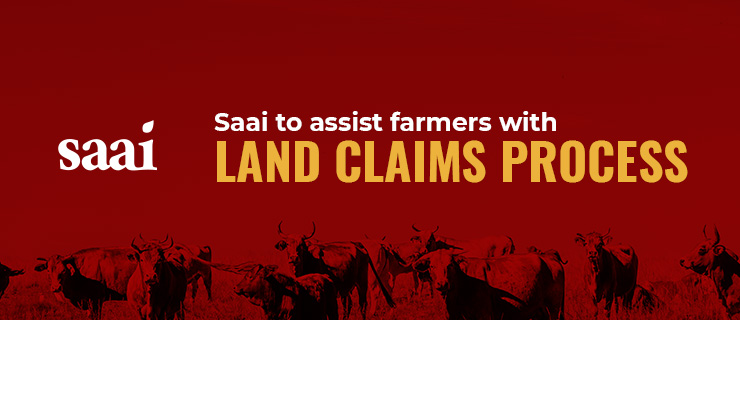 The Southern African Agri Initiative (Saai), an agricultural network for family farmers, developed procedures in cooperation with experienced legal people to assist owners whose properties were listed in the Government Gazette by the land claims commissioner to react to the listing and help them to prepare for possible court cases. There was a sharp increase in the number of land claims listed in the Government Gazette. Landowners across South Africa are being served with the listings, and this leads to big uncertainty and confusion, as well as a decline in investment and development on affected properties.

Saai is already busy working on a large number of land claims involving its own members as well as members of its network partners. The publication of a land claim in the Government Gazette is by no means yet an indication of the validity thereof, or of the state’s intention to transfer the property to the claimants. It is simply an indication that the claim complies with the administrative requirements on face value, and that the land claims commission is working on it. Affected owners don’t need the state’s permission for further development, but need to inform the land claims commission thereof.

In practice, however, the listing has a negative effect on the property market, as well as on property values in the affected areas. Since 2007 it has especially had a negative effect on the willingness of banks and other financial service providers in many areas to approve loans with the land as collateral security. Slower development also leads to a decline in job opportunities and economical growth.

The process of transferring properties in land claims is uncommonly slow and elaborate. Voluntary sellers that accepted offers on their farms in Mooketsi in 2003 have to date not yet received purchase agreements. Lawyers performing transfers in Mpumalanga have been sitting with incomplete transactions since 2007, and certain farms are in the meantime repeatedly listed in favour of other claimants. Conflicting claims lead to big tension between claimants and cause conflict between communities.

The Department of Land Reform and Rural Development is nearly paralysed by comprehensive corruption, nepotism and ineptness, and its ability to effectively manage the processes and procedures regarding land claims is extremely limited. Kgalema Motlanthe’s high level report on land reform, as well as the special investigating unit disclosed damning evidence about the state of crime and the inability within the Department, and landowners and the taxpayer suffer the most as a consequence.

Saai is sceptical about the Department’s potential to clean up its act and has been asking since its establishment for the privatisation of certain functions of land reform. Saai is also striving towards helping to extend the powers of the Zondo commission of inquiry into state capture to also investigate land reform. However, the ANC as well as the relevant department want to avoid it at all costs. Saai believes that conscientious administration – free from intimidation, bribery, nepotism and corruption – is a requirement for successful land reform.

Landowners whose properties have been listed in the Government Gazette can contact Saai at navrae@saai.org.